Hello everyone,
My author “Meet and Greet” series continues with my friend, DJ Small. With a wicked imagination and wonderful sense of humor, I have yet to be disappointed in one of his stories. I hope that once you meet him,  you’ll feel the same. I have a feeling you’ll be seeing his name on screen writing credits very soon. 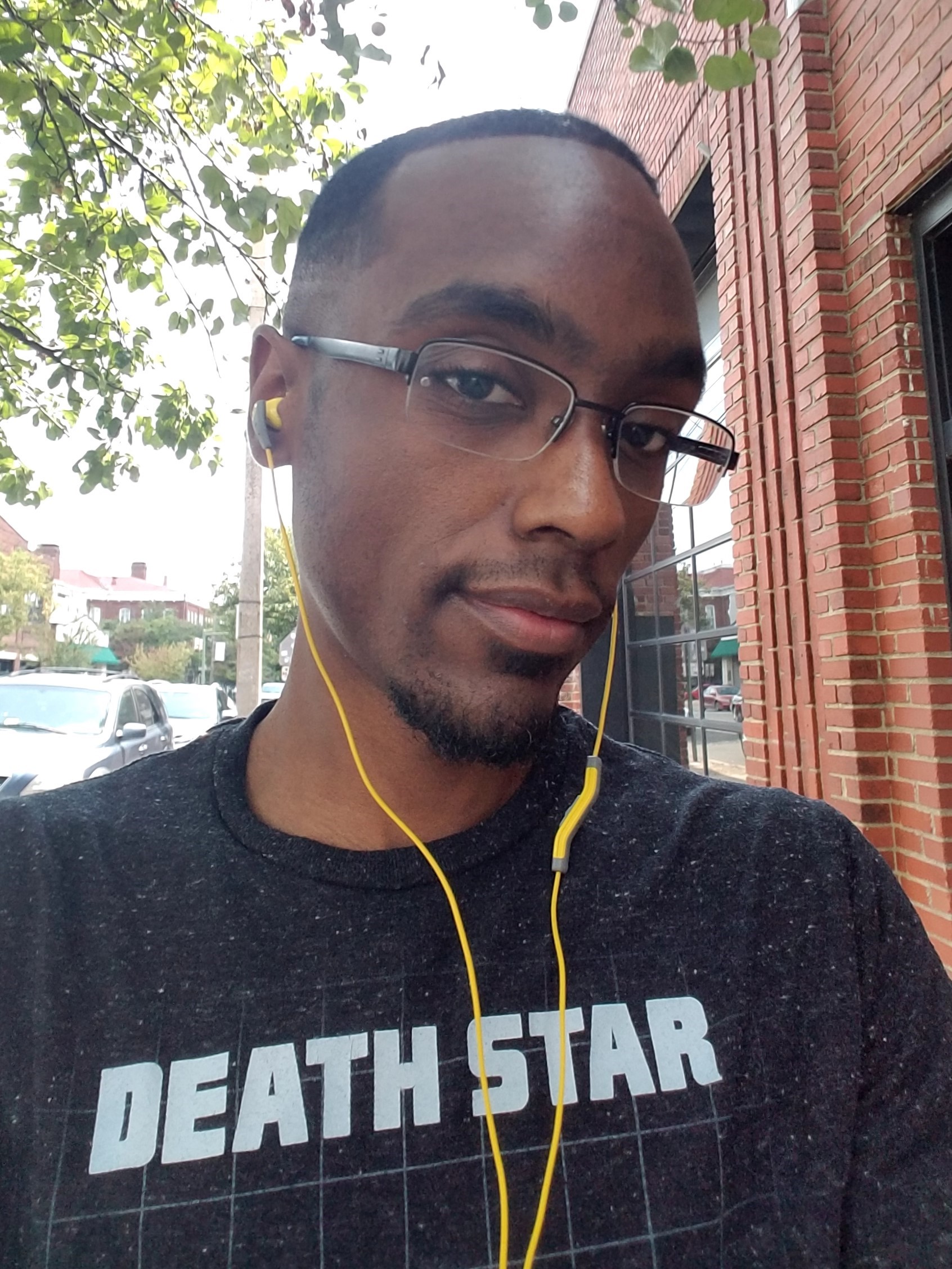 1. How did you get started writing?

I started writing when I was 13. I was a queer kid who lived in the middle of nowhere, Virginia. Seriously. Closest store was 15 minutes away and I spent an hour on the school bus. Anyway, I created my own world of one day finding love and settling down and it started with that then it continued to evolve, developing worlds where queer identified characters got their happy endings or fell in love.

2. What do you like most about writing?
The characters. I know this is going to sound rather multi-personality of me, but each character is their own person and they have their little idiosyncrasies which either captivate me or cause me to hate. Either way, they become people I get to know intimately without all the pesky small talk.
3. Why do you enjoy writing lesfic?
Lesbian fiction is a unique breed of fiction. I say this because the main character is a woman who is typically strong in some way, shape, or form – or she gets there – and along the way she discovers love with this other woman and they complement each other. I enjoy writing those stories because it’s almost magical.

I feel women love differently and the love between two women is just amazing. Beautiful, really.

Crap, now I’m going to get sentimental.
4. How did your novel, “Pool of Lies,” come about?
“Pool of Lies” started out as fanfic, but the original idea came from Lana Del Rey’s song “Off to the Races.” There is something about this song which screams to me seedy strip club, characters leading double lives, characters hiding things about themselves, and so much more. I want to blame the driving bass in the song, but also Lana’s vocals add to it. Wonderful song and I highly recommend it.

5. What’s your favorite genre to read?
I don’t have a particular genre. Like I am with music, I’m all over the place. But my favorite books to read are suspense novels with a little romance in it.
6. What books are you reading now, or are on your to-read list?
Let’s see I recently listened to “Hunter’s Pursuit” by Kim Baldwin. Loved it. I honestly sat in my car to finish listening to that one. I have the “Handmaiden’s Tale” on my Audible app rearing to go, so I think it will be my next listen. I also recently bought books 5 and 6 of Ali Vali’s Cain Casey series. I plan to binge read those because the series is addictive.
7. What writers do you look up to and why?
Yikes! Loaded question. Um…Christopher Pike because he introduced me to suspense when I was like 10 and I ate up his novels. Um….most of my writing role models are TV writers. I love Shonda Rhimes because she has written shows which draw you in and the diversity on them is amazing. She’s passionate about good TV and pushing the envelope. Same goes for my second writing role model, Emily Andras. You know she fights to tell these stories, and the fight for her is a mountain versus what Shonda has to go through, but you have to admire that. Plus they’re both great speakers. Watch Shonda’s TED talk…it changed my life. My favorite quote from it is, “If the song of my heart ceases to play, can I survive in the silence?” I believe she was talking about doing what makes you happy and forgoing it and it’s something which has stuck with me as I take on these challenges as a writer.
8. You’ve also branched out into screenwriting. What drew you to that new venture? What would be your dream gig as a screenwriter?
Money is what drew me into screenwriting. I got this crazy notion I would sell the screenplays I write and be done with it. I had lofty goals. Then the death of Clexa happened on 100. Like everyone I got all up in arms because it followed another pointless trope – full disclosure didn’t even watch the show, but thanks Tumblr – and I forgot about the money and focused on representation. Queer representation, POC representation, representation of women, and etc. I became a student of TV writing and have yet to look back. I want to change television.
My dream gig is working for Shonda Rhimes and collaborating with Emily Andras. Oh my goodness I would be over the moon to work with either of them.
9. If you were a character in a book, what genre would you want it to be?
Action. But like nerdy action. The computer geek who happens to be a perfect shot.
10. What’s your favorite character you’ve written so far?
Kacey Hudson. She’s sarcastic, intense, and bloody dangerous, but she loves fiercely. Honestly she is one my favorites, but close to her would be Emery who is a character in a fanfic I’m currently still posting.
11. If you could have any actor/actress play that character in a movie, who would it be?
Oh boy. Oh Boy…pass.
12. What’s up next?
Up next is the first book of my werewolf series. I’m trying not to divulge much about it, but I’ll give the gist. My main character, Avery, finds out she is a werewolf and she is “supposedly” the one to end the war among the werewolves. It’s a different genre than my first book, but I think people will enjoy it. (See the end of the blog for a teaser)
I think my drive now when I write, yes, it’s still for myself but also I want to change the world either through books or by writing for TV. Either way I want diversity to not be seen as some big thing and that people are people. We all eat, breathe, and love. Some of us may love differently, but it doesn’t make anyone better than another. I want to show people their humanity and make them realize differences aren’t something to be feared, but embraced. I’m realist who is also a dreamer so it gets dangerous sometimes.
I’d like to promote Pool of Lies in a shameful plug. Available on Amazon and now on Kindle Unlimited. I’m on twitter at @djsmallauthor and my website www.djsmallauthor.com is where I throw up updates and you can sign up for the monthly newsletter.
I appreciate the opportunity for the interview and I’ll have to interview you for my newsletter S.W.
I look forward to it, DJ. Thank you for taking the time share a bit about yourself. I hope readers will check out your sites and see all you have to offer. Best of luck on your next writing project. I’m looking forward to it.
Thank you all for reading. Before you go, have a taste of DJ’s next book (see below), then follow him for details on its release date.
Until next time, all the best to you.
S.W.
An excerpt from DJ Small’s untitled Book 1 of his werewolf series:

The drive up the steep, narrow road to the top of the mountain had been a tedious one and it wasn’t made any better once the snow started falling. It began as small, innocuous flakes, but now they had gotten larger and were affecting visibility. Despite the snow, Avery had been able to check the three posts which were close to the top of the mountain. Her search had yielded no results. She had found no sign of Vick being at any of the posts and no sign of him planning to go to them eventually. Bill had radioed Avery twenty minutes ago and informed her he hadn’t found anything either. The report caused the feeling in her gut to worsen, but Avery ignored it. She was now going to check Vick’s house to see if he was there.

Avery reached the beginning of the narrow road and she noticed a person getting ready to go up one of the mountain’s side trails. Avery rolled her eyes and let out an irritated growl. She didn’t have time to deal with adventurous tourists. She drove the Jeep over to the trail and maneuvered it so she was blocking the person from it. Avery rolled down the window and was pleasantly surprised to see the dazzling green eyes she had seen earlier that morning. The adventurous tourist turned out to be the woman who had come into the Monsons’ café. Avery grinned. She wondered if the woman still had her cheeky attitude now that she had her coffee. “Ma’am.”

The woman raised one of her eyebrows. “Ranger Lawson, you could have run me over.”

Avery chuckled a little and stated, “Ma’am if I had wanted to run you over, I would have done so. But since I’m not in the habit of running over pretty women, the best I can do is offer you a ride back down the mountain. You will not be going up it.” Avery’s eyebrows scrunched together. “Also, how do you know my name?”

“Not too bright for a ranger are you?” The question further confused Avery and the woman chuckled as she pointed at her. “The fancy patch on your shirt says ‘Lawson’ so I can only assume. Then again, you know what they say about assumptions.”

Avery smiled and nodded. She liked the woman. She was frank, not shy, and had a bit of a mean streak. She moved to get out of the Jeep and when Avery was standing in front of the woman she noticed the significant height difference between them. The woman, however, wasn’t intimidated by Avery’s height or her close proximity. She cocked her head to the side so she could look up at Avery, waiting to see what she was going to do or say. Avery chuckled a little and bent down to pick the woman’s pack up off the ground. As she stood up straight, Avery zipped up the open pocket, then turned around to put the pack in the back of the Jeep. She closed the door and turned to face the woman. Avery held out her hand. “The name is Avery. You can stop it with the Ranger Lawson bit.” She smirked. “You’re not from around here are you?”

The woman took hold of Avery’s hand and shook it. “Rhea, and no I’m not.”

Avery wanted to stop and have a conversation with Rhea, but she couldn’t. Vick was still missing and she had to monitor the snowstorm, which was going to put her in bad mood. Avery smiled a little. “It’s a pleasure to meet you Rhea. I’m going to have to ask you to get into the Jeep so I can take you back to base.” She chuckled. “Going up the mountain right now would be crazy. We’re expecting to get a tremendous amount of snow and I can’t allow a civilian to go up in these conditions.”

The woman’s green eyes studied Avery intently, then a mischievous glint came to them. “Aren’t you a bit young to be in charge of something like this?”

Avery rolled her eyes, then gave the woman a pointed look. “I’m just the assistant head ranger. Now can you get in the Jeep, please?”